It’s been 40 years since Star Wars blasted it way onto the big screen and became a worldwide cultural phenomenom. Each year, generations of fans celebrate the 4th day in May as Star Wars Day, the unofficial holiday to celebrate the series of movies and televisions shows that spawned from mind of George Lucas. Here are a couple of ideas to get in you in the Jedi or Sith mind set. “May The Fourth Be With You!”

Learn about how the forces shape the universe. The Exploratorium After Dark in San Francisco is celebrating Star Wars Day with a unique and thought provoking series for adults. Thursday night, have dinner by the Bay and stop by and check out the artworks, inventions and encounters with the force…(physics). General admission is $15 for adults 18 years and older.

Celebrate Star Wars Day with a super secret screening of The Force Awakens. Dress up as Kylo Ren, Princess Leia, a Stormtrooper or any of your favorite Star Wars characters for a chance to win some prizes. They’ll have food and drinks, but not served on a astromech droid like in Jabba’s Palace.

No Cantina in the Outer Rim can compete with this Star Wars party at The Great Northern in San Francisco. SFIndie and CyberiaVR is hosting a night of DJs and Stormtroopers. Dance to the dopest beats provided by their special guest DJs Ney x Miss Mak and JohnJohn. Plus Brass Tax DJs in special “A Tag of the Cones” Tag Sets includee JoeJoe vs Galen, Haute Mess vs Mace, Ernie Trevino vs Marky Ray. “People come from all over the world to visit the Yoda statue at Industrial Light & Magic,” says Atherton. “ILM is the VFX company Lucas started to do the visual effects for the original Star Wars, and it’s still one of the most successful and influential VFX studios. It was really amazing to get to make our own little love letter to Star Wars right where real Star Wars is made.” See the statue above the decorative fountain in the courtyard of the 23-acre Lucasfilm campus in the Presidio. Remember, Letterman Digital and New Media Arts Center is a workplace, not a tourist attraction. However, visitors are often allowed into the lobby to view the life-size Boba Fett and Darth Vader, mini figurines of Chewbacca and other characters on the bookshelves, replicas of light sabers, blasters, head bust artwork from Star Wars movies, plus framed iconic movie posters. Yoda & Indiana Jones Statues In San Anselmo
541 San Anselmo Avenue
San Anselmo, CA 94960
Open daily – 6:00am to 9:00pm
Just 30 minutes north of San Francisco, Imagination Park in San Anselmo sits the second Yoda statue. Standing alongside Yoda is a statue of “Indiana Jones” another of George Lucas’ creations. In 2013, Lucas unveiled the statues on the land he donated next to the San Anselmo City Hall. “We decided the best thing to do was probably to donate it to the Chamber of Commerce,” Lucas said “…and put something here that would help all of the young people and give a center to the town.” While you’re in the Presidio, don’t miss the Walt Disney Family Museum. Conceived by his own daughter, the museum is dedicated to the vast creative genius of Walt Disney. Since Star Wars was acquired by Disney Studios in 2012, you can connect the dots from this museum right through to the very latest Star Wars film. Here’s a must-see attraction for any true enthusiast of the evolution of animation. On May 4, 2017, the museum is open from 10:00am to 6:00pm with last entry for the day at 4:45pm. Cinema is not the only passion connected to Star Wars‘ creator George Lucas. Fine wine is being produced on Skywalker Ranch in Marin. “There are some other Bay Area ties to Star Wars, such as Skywalker Ranch and 32Ten Studios, but unfortunately those aren’t open to the public,” Atherton says. The best you can do is to raise a glass in honor of May the Fourth — if you can get ahold of a bottle of the highly rated, small production Skywalker Pinot Noir or Chardonnay. According to the website, “Lucas was inspired and encouraged by the success of his friend Francis Coppola’s winemaking endeavors.” In fact, the Skywalker Vineyards winemaker, Scott McLead, was previously director of winemaking at the Francis Ford Coppola estate in Napa. With locations in the Bay Area and in Southern California, you can enjoy a Mels Supreme Burger, topped with bacon, ham and American cheese while enjoying the hommage to George Lucas and his hit film, American Graffiti. Celebrating teen life in the 50’s, Lucas filmed the movie in 1972 with some of the scenes shot at the original Mels Drive-in located at 140 South Van Ness Avenue in San Francisco. A condo now inhabits the address, but you can stop by the Mels Drive-In located up the street at 1050 Van Ness Avenue. 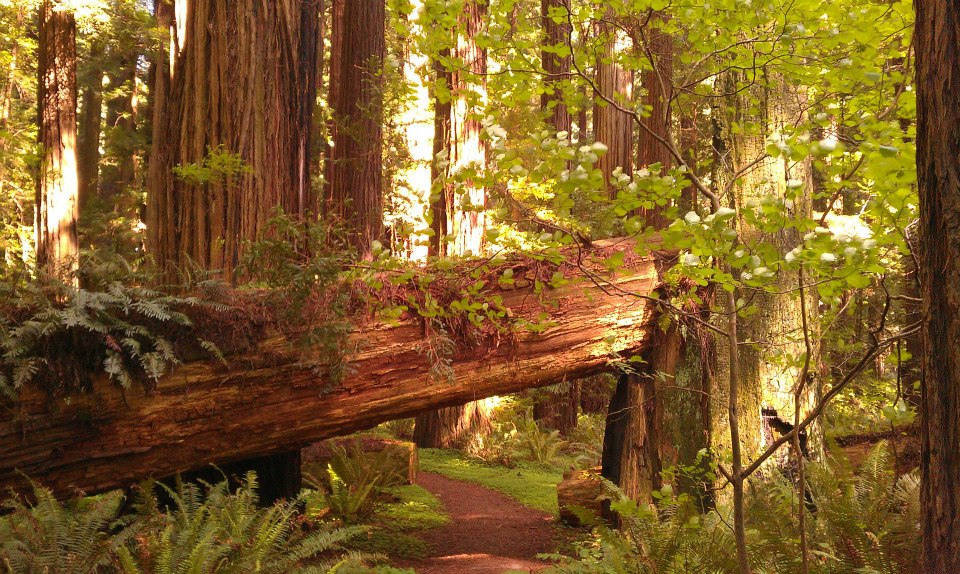 Just a little over 4 hours north of San Francisco, visit Owen R. Cheatham Grove in Grizzly Creek Redwoods State Park. This is the location where some of the forest scenes of Endor was filmed for the third Star Wars movie Return of The Jedi. Just don’t expect to find any Ewoks running around.