There are many churches across the country which are very beautiful. Everything from the hand-painted stained glass windows to the unique architectural features are just some of the features that make many of these churches absolutely breathtaking. In addition to being beautiful on the inside, many of these amazing churches look even more amazing from the outside and fit perfectly in with the surrounding area.

Let’s take a look at some of the most beautiful churches in America. Many of which are located in some of most popular vacation spots in the country.

The Washington National Cathedral, also referred to as the Cathedral Church of Saint Peter and Saint Paul, has been the site for 21 presidential funerals, including William McKinley (1901) and Gerald Ford (2007), as well as national heroes such as Woodrow Wilson and Helen Keller. Inspired by Neo-Gothic design, everything from the limestone exterior to the steep arches and its stained glass windows to the flying buttresses make this cathedral absolutely breathtaking.

When visiting the Washington National Cathedral, stop by the Pilgrim Observation Gallery, located near the Wisconsin Avenue entrance. There you will have an amazing 360-degree view of our nation’s capital. Guided tours, including behind-the-scenes tours, are available for a small fee.

When planning a vacation, make time to stop by your vacation destination’s churches. You will amazed by the architectural design and historic meaning so many of the country’s most beautiful churches have. You will be amazed by the beauty and size of the Cathedral Church of St. John the Divine in New York City. This Episcopal Cathedral is so massive it expands across an entire block and is tall enough to house the Statue of Liberty. The Cathedral Church of St. John the Divine was constructed in 1892 and was designed by architects George Heins and Christopher Grand Lafarge. It was originally designed in a Romanesque-Byzantine style, which is far different from the limestone design you will see today. After several fires, Ralph Adams Cram took over and transformed the church using the French Gothic style we admire today.

The Great Rose Window, which is set above the bronze doors on the Cathedral’s Amsterdam Avenue side, is the largest stained-glass window in the country. This window contains more than 10,000 pieces of colored glass that make this window unique and a must-see when visiting New York City. The 20-minute subway ride from Times Square is well worth it.

Take a self-guided tour from 7 a.m. to 6 p.m. any day of the week. Workshops are also available for a small fee. 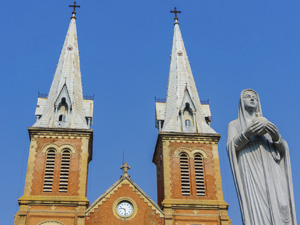 Originally built in the northwest area of Chicago back in 1899, St. Mary of the Angels has been through a lot, making it a miracle the structure still stands in the Windy City today. It was not until 1920, when the present-day version of the church was finally completed. The church faced demolition when the Kennedy Expressway was built in 1960, as many residents moved away from the area, dropping worship attendance. The structure was officially saved three years later by the remaining parishioners and the priests of Opus Dei. After saving the church, extensive renovations began, including the preservation of the 29 nine-foot tall angels found lining the church’s rooftop.

In addition to the Italian Romanesque-inspired design, St. Mary of the Angels will take your breath away the moment you look at the stained glass windows located throughout the inside of the church. These windows depict the 12 Apostles, the Stations of the Cross, biblical scenes and images of saints and angels.

Contact the church to schedule a visit and a guided tour.

Thorncrown Chapel may be nestled in a woodland setting in the Ozarks, but there is no missing this forty-eight foot high chapel. This breathtaking, wooden structure was designed with 425 windows made out of more than 6,000 square feet of glass. Thorncrown Chapel is set atop more than 100 tons of native stone and colored flagstone, which adds to the beauty of this setting. At night, this chapel glows in the dark forest, making it a sight to see.

Thorncrown Chapel originally opened in 1980 and since opening, it has had more than six million people come through and visit. Plus, this church has won several architectural awards including the American Institute of Architects’ Design of the Year Award (1981), and AIA has named it as one of the top buildings of the twentieth century.

Visitors are welcome to stop by during the months from April through November, however, due to the hosting of occasional special events, it is always a good idea to call ahead to schedule your visit.

Heather Landon is a freelance writer with more than 20 years of experience. She has combined two of her passions – writing and travel – to share her experiences with others. You can read more of her articles at Examiner.com.